"Take ownership of your transition! Changing careers is not easy and shouldn't be taken lightly " - Elizabeth Brunette

When General MacArthur said “upon the fields of friendly strife are sewn the seeds that on other days, on other fields will bear the fruits of victory,” he was referring to the Constantino clan; the precocious five children born to Lieutenant Colonel and Mrs. Paul J. Constantino. As the third oldest and only girl, my four brothers and I were competitive and always strove for excellence. My parents instilled within us the values of hard-work, personal discipline and public service. Those values paved my early foundation to seek a nomination from Senator Tom Lantos (D-12, California) to the United States Military Academy, a nomination which I received in 2008. With a competitive and determined spirit in-hand, I sought every opportunity to challenge myself and excel within West Point’s rigorous training regimen; physically, academically and militarily. I graduated from West Point and commissioned as Second Lieutenant in June 2012 with a Bachelors of Science in Political Science with Honors and Thesis.

Upon graduation, I attended the Military Intelligence Basic Officer Leader’s Course at Fort Huachuca, Arizona and graduated with Honors, having earned high marks in every pursuit including the extracurricular Van Deman Writing Program, earning “Gold” in the German Armed Forces Proficiency Badge and earning the Army’s Military Outstanding Volunteer Service Medal. I challenged myself to ensure that I arrived at my first duty station with a few ribbons and awards on my ASU uniform, and I did.

My first duty station was with the 173rd Infantry Brigade Combat Team (Airborne) in Vicenza, Italy. I deployed to Afghanistan in support of Operation Enduring Freedom (2012-2013) as a member of the Brigade Intelligence Cell tasked with directly supporting retrograde operations from RC-East in Logar and Wardak Provinces. Upon return to Caserma Ederle, I served as the Brigade’s Analytical and Integration Platoon Leader and the Military Intelligence Company’s Executive Officer, supporting airborne operations around Italy, Germany and Slovenia. I then served as the 173rd Brigade Special Troops Battalion S-2 (Intelligence Officer), supporting dozens of multi-operational field exercises across Europe. As an airborne leader, I earned a slot to attend the rigorous U.S. Army Advanced Airborne School (Jumpmaster School). After passing every module and as a first-time-go at the JMPI exam, I earned my Jumpmaster badge! I extended my tour of duty when I was appointed as the first female Command Group Operations Officer for the senior 173rd Brigade Leadership since the unit’s reconstitution in 2000.

Ever-wanting to excel and push my personal and professional boundaries, I applied and was accepted to attend the Maneuver Captain’s Career Course at Fort Benning, Georgia; a professional development program for Infantry and Armor Captains. I attended the six-month program and graduated in the top 20% of the class and as the only female honor graduate, after passing every module. I earned the Captain Travis Patriquin Award for Writing Excellence, given to the student with the best analysis on an area of conflict and best overall analytical ability and applicability, and I was nominated as a candidate for the U.S. Army’s “Project Warrior” cohort, an initiative by Chief of Staff General Odierno to identify agile and adaptive leaders to instruct and lead the next generation of Army leaders.

My most recent duty station was with the 3rd Infantry Division’s Sustainment Brigade as the Senior Intelligence Officer whereby I supported two back-to-back CTC rotations at the National Training Center at Fort Irwin, California and Joint Readiness Training Center at Fort Polk, Louisiana. I was active in establishing the first Women’s Mentorship Network organization at Fort Stewart and was recognized military-wide as a “Top 40 Under 40” honoree by Search & Employ Magazine.

After ten years of distinguished military service, I transitioned into the private sector, accepting a position with Amazon in the Military Leader Program (Pathways). As a former military leader, I continue to advocate for military veterans in Amazon. In addition to working as a leader in operations, I also support veteran recruiting programs and created the first Warrriors@Amazon affinity group in Richmond, Virginia.  My personal leadership philosophy is one of kaizen, of continuous personal and professional development and improvement. 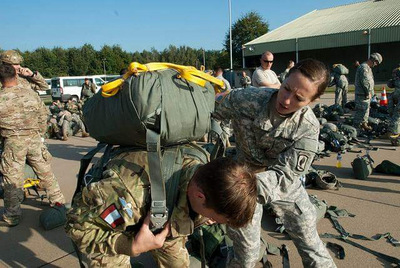 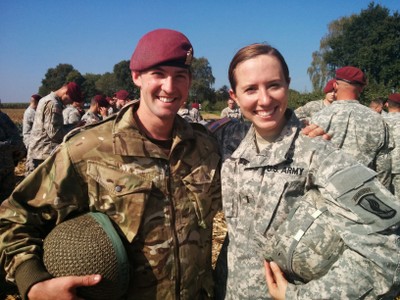 WWS Magazine: When did you start preparing to transition out of the Military?

E.B. : I started preparing for my transition 12 months before my separation date. Once I knew I was going to separate on June 1st, I factored in my terminal leave and began my transition process with both my chain of command and the installation. It was important to communicate my anticipated timeline with my leadership and family.

WWS Magazine : What program(s) do or did the Military offer to assist you with transitioning?

E.B. : The Soldier for Life Transition Assistance Program (SFL-TAP) at Fort Stewart, Georgia provided valuable transitioning resources, including classes on the Post 9-11 GI Bill, veteran benefits, higher education and personal finance. In addition to the mandatory week-long courses, there were several other optional courses, including the Entrepreneurial Workshop, which I attended to gain more knowledge post-transition career opportunities.

WWS Magazine: Were/Are you confident to enter into the civilian work space amongst other areas upon transitioning out of the Military?

E.B. : Yes, I was able to confidently enter the civilian work space after transitioning out of the Military because I had a plan and a team of peers, loved ones, and mentors that were helping me. If it wasn't for the love and support of my family and friends and the support of chain of command, I would not have been as successful during my transition.

WWS Magazine : What are 2-3 challenges you are or have faced during your transition?

WWS Magazine : What are 2-3 resources you wish were made available to you to aid in a smooth transition?

E.B. : I luckily sought out many resources during my transition, which made it very smooth and I recommend that everyone looks into these three resources:

1. Job/ Career Fairs: There are several tailored to the military specifically. Even if you know what you want to do post-military, attend a conference anyway in order to plan for contingencies and network!

3. Industry Certifications: See if your Transition Office provides services for industry certifications (like Six Sigma, PMP, CSS, etc.) If not, the Institute for Military, Veterans, and Family at Syracuse University offers online courses and free tests if you sign up for one of their cohorts!

Few words of advice for fellow Women Veterans in regards to transitioning out of the Military.

You are not alone! You are not the first one who has transitioned out of the military. There are scores of (men) and women out there who want to help you succeed. If you are not sure where to start in your transition, reach out for help; it's ok!

Take ownership of your transition! Changing careers is not easy and shouldn't be taken lightly. Take advantage of every opportunity to explore new career fields during this time by attending job fairs, working with head hunters, and looking into educational programs. This will enable you find a post-military career that works best for you and your family!